In 1954, Roger Fillon met Pierre Pichon and formed a partnership to create Fillon Pichon company to manufacture perforators under the “FILPIC” brand name.

In the early 60’s the business had grown enough to support a full-scale manufacturing facility on the small village of Faverolles, France.
During the sixties, Mr Roger Fillon was approached with the idea of designing and developing the first paint mixing machine to stir automotive paints for European region. The first “Fillon Pichon” machine was successfully built and received great appreciation within the industry.

By 1972, Fillon Pichon was at the cutting edge of technology, already producing explosion-proof motors.

Roger’s oldest son Daniel took over the reins of the company and took a new leadership role as the CEO of the company. Daniel Fillon gave a new dynamism to the company making it work in the international arena.

In 1982, EUROBOT was established, a sister company to design and manufacture mixing lids to support the growing equipment business.

In 1985, the first subsidiary was created in the United States.

The demand for Fillon Pichon equipment grew in worldwide demand. Subsidiaries were opened in Singapore, China, Japan, and Brazil.
Fillon Pichon also purchased a state of the art production in China to support growth.

In 1997, Fillon Pichon purchased FAS Company ( a main competitor at this time) to be able to offer the market an alternate mixing technology: “worm screw”.

In 2003, Fillon Pichon, FAS and EUROBOT merged to form FILLON TECHNOLOGIES. During this decade, FILLON TECHNOLOGIES completes its range of equipment for bodyshops by adding to the “Mixing range” new businesses such as infrared dryers by acquiring the infrared dryer company Itech which was well established in Europe, gun cleaners and aerosol fillers.

In May 2011, the Fillon family decided that it was time to go to new horizons and sold the company to co-owners Jean Christophe Doux and Sébastien Reinbold. The new ownership team looks forward to continuing the technology developed to new markets.

In September 2014, Fillon Technologies celebrates its 60 years of innovation and know-how at the service of paint manufacturers and bodyshop owners.

In 2017, Fillon is launching its brand new range of fully modular mixing machines: ALPHAMIX. Based on modular solutions, the Alphamix is available in half-module workstations and / or complete machine. Stirring and storing shelves can now be both installed in one unique machine according to your needs. 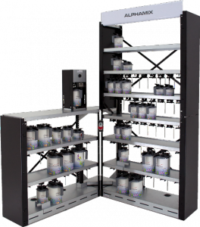 This site uses cookies during your visit to improve navigation, collect anonymous visit statistics and offer you enriched content. You can accept or decline their deposit. Some features may then no longer be available. Consult our Genreal Conditions of Use.

This site uses third party services, including embedded Youtube videos. Uncheck the boxes of the services you do not want to use, and click "Update settings" to save your settings. Note: saving these settings uses a cookie that is valid for 30 days; to access these settings again once they have been saved, delete the cookie linked to this site and named privacy_embeds.
Go to Top